As we celebrate the 25th anniversary of Friends, it still remains one of the funniest and most beloved shows of all time. While it may not have the same rewatch value as The Office, it boasts of some of the most quotable, hilarious, heartwarming and heartbreaking moments in sitcom history. In honor of 25 years of Friends, this is a ranking of the 15 best episodes from the show.

Let’s start at the very end. The final episode of Friends accomplishes something that most sitcoms don’t, as it brings the series to an emotional and truly satisfying end.

We are treated to quite a lot of flashbacks over the course of ten seasons, but none comes as good as the One with the Prom Video, where we get our first looks at the permed versions of Rachel, Monica, and Ross. When Rachel kisses Ross after watching their old prom video, it marks one of the many memorable moments in the history of the famous on-again, off-again couple.

Being one of the many memorable Thanksgiving episodes in the show, this one has the gang remembering and sharing their worst Thanksgivings. It involves another hilarious flashback from the Geller household, has Joey (and Monica) wearing a frozen turkey on their heads, and marks the first time Chandler confesses his love to Monica. 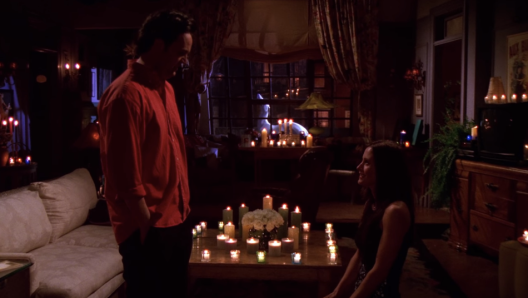 The next in our list is the one where ChandlerMonica proposes to Chandler, a truly special moment in their relationship that brings tears of joy every time I watch it. 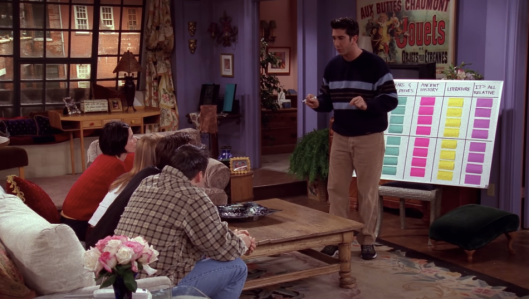 The One with the Embryos centers around Chandler and Joey facing off against Rachel and Monica, with Ross playing quizmaster. It all begins with Rachel getting pissed by the din made by the chick and duck, and ends with Rachel blurting out ‘transponster’ as the answer to the final question about Chandler’s job. 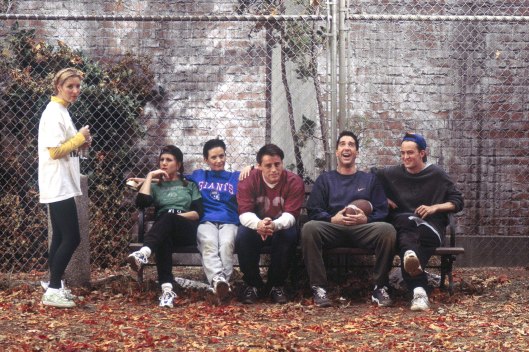 Monica’s sibling rivalry with Ross goes up a notch when the entire gang gets dragged into a game of American Football for the ‘prestigious‘ Geller Cup. Rather expectedly, Rachel gets picked last and is asked to ‘go long’ all the time. An underrated highlight of the episode is Joey and Chandler squabbling over a Dutch girl, with Joey hilariously getting the Netherlands and Holland mixed up.

The storylines involving Ross and Elizabeth’s doomed relationship, and Monica and Chandler competing against Phoebe to find a date for Rachel, remain average at best. But this is the episode that spawned Joey’s iconic ‘the fridge broke, so I had to eat everything’ line. Watching Joey trying to get everyone to pay for his fridge by pleading, threatening, and shoving(!), is just incredibly funny.

After Ross and his girlfriend Julie decide to get a cat, a drunken Rachel leaves a phone message for Ross that irrevocably changes their relationship. Also, Ross and Rachel’s first kiss is just amazing.

The One with the Videotape is another Ross/Rachel classic where the debate of who came on to who(m) is settled by a videotape. I particular enjoy Monica’s reaction to Rachel handling her wedding invitations with blatant disregard. This episode also introduces us to Joey’s western Europe story.

While some elements of the episode may not have aged well, Brad Pitt’s cameo as an old classmate who hated Rachel (the two were married at the time) is a complete laughter riot and probably the best cameo in the show’s history.

Talking of cameos, the episode where Christina Applegate stars as Rachel’s self-obsessed sister, is another bonkers of a Thanksgiving episode. She calls Monica a ‘crazy plate lady’, mistakes Emma to be Emily, while thinking Phoebe is called Emma. The episode has so many laugh out loud moments, including Chandler breaking Monica’s wedding plates and Joey using his ‘raccoon’ story to convince her otherwise.

The One Where Ross is Fine, in conjunction with the final season’s premiere, has a completely bonkers storyline with Ross kissing Charlie, Joey’s ex-girlfriend, and Joey kissing Rachel, Ross’s ex-girlfriend. Chaos ensues as Ross, who insists he’s ‘completely fine’ in increasingly high-pitched tones, invites the other couple over for a double date, which goes about as hilariously cringe-worthy as it can get.

In another excellent (and equally cringe-inducing storyline), Chandler and Monica visit a couple who had adopted their son, only for Chandler to accidentally blurt out to the kid that he is adopted and that Santa isn’t real either.

Ross lectures about Unagi to Rachel and Phoebe before eventually getting his ass handed to him. While Unagi is now part of Friends folklore, the other portions in the episode are also memorable. Joey employs a fictitious twin (who looks nothing like him) for an audition that needs twins, and Chandler gives Monica a mixtape that seems the perfect Valentine’s Day gift, until we hear the voice of Janice(!).

The One Where Ross Gets High is the FIFTH Thanksgiving episode in our list. It is also arguably the best of the lot because all the storylines work so great. There is Rachel’s infamous beef/custard/jam trifle, Monica and Ross tattling to their parents on each other, Chandler finally winning over Monica and Ross’ parents, and Phoebe developing feelings for Mr. Geller.

While I’m sure every Friends fan will have their own list of top 10 favorite episodes, there is no question on the show’s best-ever episode. Monica and Chandler’s secret relationship heads into new territory as the rest of the gang, one by one, learns about their relationship. As Phoebe and Rachel attempt to mess with Chandler and Monica, Joey gets caught in the crossfire and everything gets hilariously awkward when both sides pretend that they-don’t-know-that-we-know-that-they-knowTM.